Just a hobby, won't be big and professional

Here is Linus Torvald's post to the minix newsgroup, where he announces the availability of his free operating system (that later was named Linux): 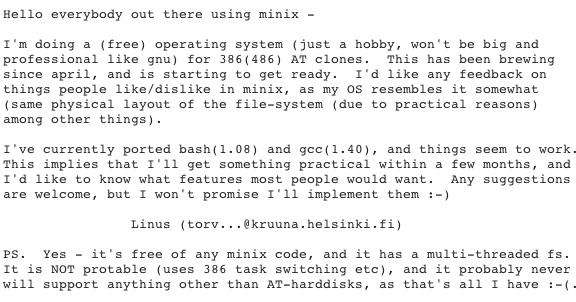 There are lessons to be learned from this post, in particularly from a marketing perspective.

Linus asks for feedback on a minimal, barely functioning prototype. It's not even a minimal viable product.

He directly address (what will become) the core audience of his project, and shows them the glimpse of a solution that may be better than what they already have.

He tells them that it will look familiar to what they have, but without the limiting constraints.

He gauges his audience's interest ("I'd like to know what features most people would want") and reduce their expectations by taking an arms-length approach ("this is just a hobby").

Linus' post is brilliant marketing that entrepreneurs should take note of.

Thanks to the Linux Foundation for reminding us to celebrate the 23 year anniversary of this free open operating system.