In the winter of 2014, I created the web app “CreateLists”, a simple listmanager providing pages for your projects, and lists for your todos.

When the app was online you could reach it at createlists.net. This post recaps the app’s short life.

The basic idea of the app is that you can organise your projects by creating pages of todo lists. Lists and their items can be moved around, re-prioritised, organised, checked, and arranged just as you feel is right.

Your lists are stored on your device, and can be accessed through your browser, even when the device is offline. The lists can be synchronised, via a paid backend service, so that you could access the lists from any device. 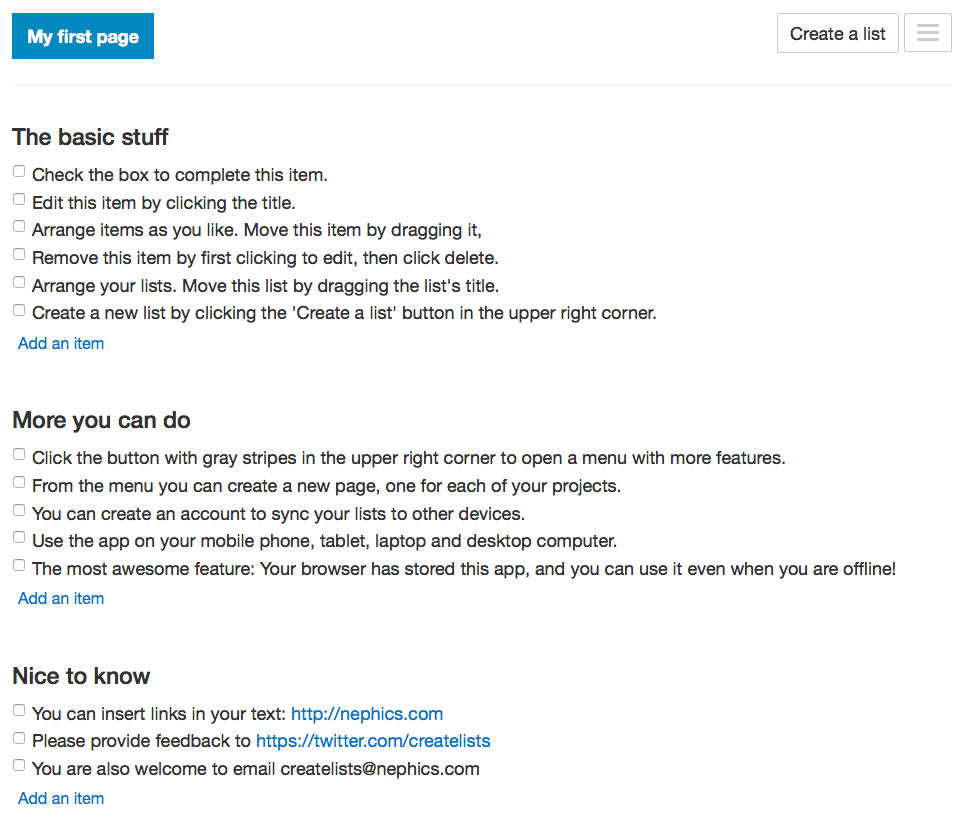 I started building the app as a way to learn about offline storage in web- browsers. In particular I wanted to learn about PouchDB, which is a close cousin to CouchDB, but it’s written i JavaScript and runs in the browser.

While building, I realised that others may want to see this, so I polished the app to a releasable state. And although the app still had bugs, I dared to mention the app in a blog post, which got me a few beta-testers.

After fixing some of the bugs, I demonstrated the app at a public Demo dag event, at the amazing FooCafe in Malmö. The organiser kindly captured the moment on Twitter.

After public release, I wrote blog post describing some of the considerations and technical details of making an offline-first web app.

The video of my presentation at the Demo dag event was released some months after.

Realising that time is very limited, and that I won’t get around to updating the app to the newest version of PouchDB, fix bugs and maintain the app, I decided to shut it down.

I’ll end this post by echoing the spirit of the app, as it was presented on the About page: